My second child was born recently, and that - amongst other things - means that my partner has recently spent forty two weeks and one day being pregnant.

The wondrous institution that is the NHS recommends that whilst pregnant you should "Cook all meat and poultry thoroughly so it's steaming hot and there's no trace of pink or blood". For my partner this meant no rare steak, and for her tastes: that meant no steak at all.

"What's the point in eating steak if it's well-done?"

I really do love that woman. So much so that I too joined in the 'no steak' pact as a show of moral support.

A Tale Of Two Temperatures

Not long after the birth, a good friend saw fit to grace us with her presence, and it seemed like a good opportunity to break the pact and cook up some finest Morrisons filet. 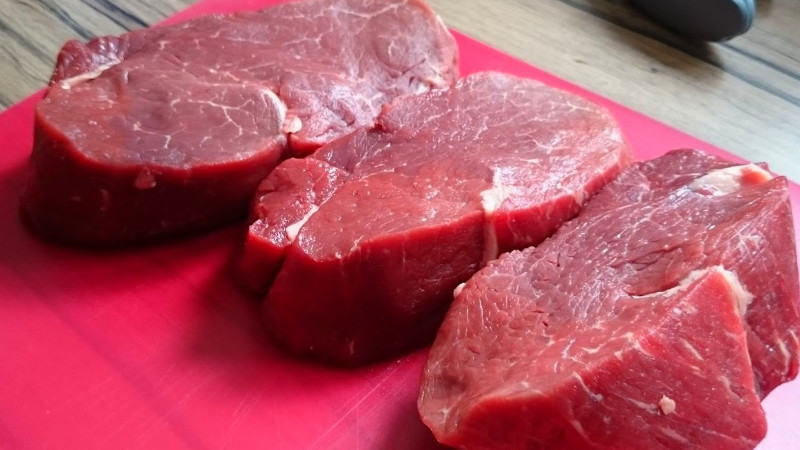 I love steak; and although it's not difficult to prepare, there is a thing about cooking it. There's two conflicting things you want to achieve to get a good steak:

The reason these two things conflict is a difference in temperature.

The Maillard Reaction is a chemical reaction that happens when you cook something. It's what makes food turn brown, makes toast taste better than bread, and it's what you need to make a steak taste great. It mostly happens at temperatures above 140°C (284°F); but generally speaking, the hotter the better.

The traditional way to cook a steak is to put it in a bloody hot pan for a few minutes on each side. This allows the Maillard Reaction to take place on the surface of the steak, and it raises the core temperature of the steak at the same time; seemingly cooking two birds with one bloody hot stone. The problem is that by the time the very middle of the steak has reached the ideal temperature, the rest of the steak is overcooked. You get a gradient of doneness from well-done at the edges to medium-rare in the middle - or you get medium at the edges but raw in the middle.

There's things you can do to improve the situation: you can leave your steak to come up to room temperature before you cook it, you can use thinner steak (although I'm not sure why you'd want to), or you can make like the French.

Sous-vide is French for 'under vacuum', and in this case it refers to the practice of cooking food in airtight plastic bags submerged in a temperature-controlled water bath. The idea is that you use water as an efficient heat-transfer medium, without letting the water contaminate the food; and whilst keeping the juices and all the flavour locked in the bag. 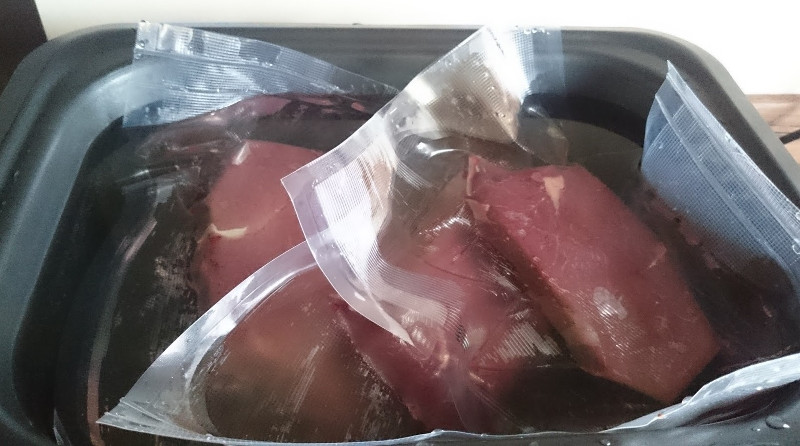 The result of cooking sous-vide is a piece of steak with goal #1 achieved: an even 53°C throughout. But what about goal #2? For that we must return to the bloody hot pan.

Because the steak is already cooked and safe to eat, you can sear the steak the ideal amount without worrying if it's cooked enough on the inside. I've found that around 30 seconds on each side is about right.

To get a good sear you'll need a couple of things:

The high smoke point oil enables you to reach high temperatures without the oil degrading (and negatively affecting the flavour), and the heavy-bottomed pan holds more heat than a lighter pan, so it doesn't lose as much heat when you put the steak in to sear. If the pan loses too much heat before you flip the steak then the second side won't be seared as well.

One minute in a bloody hot pan later and... 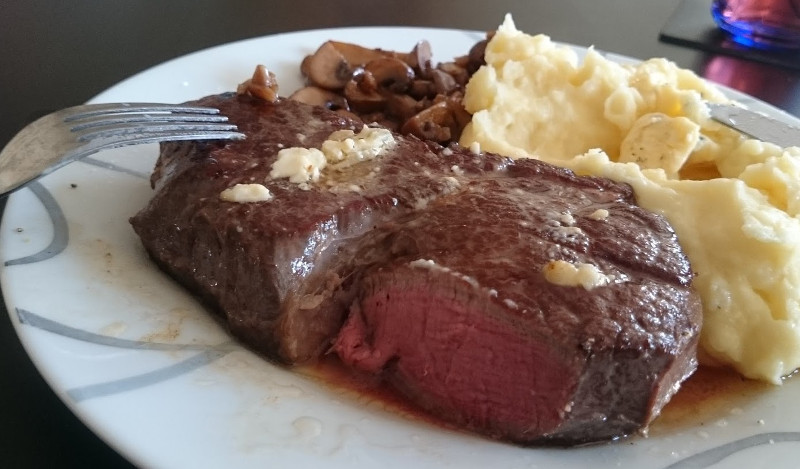 You might have noticed that in the picture above there's a bit of something on top of the steak. That something, dear reader, is Stilton.

While the steak was busy having a bath I sliced some butter and Stilton, stacked it in alternating layers, wrapped it in foil and gave it a bit of a squeeze. After a sitting in the fridge for a few hours, the Stilton's flavours infused into the butter. 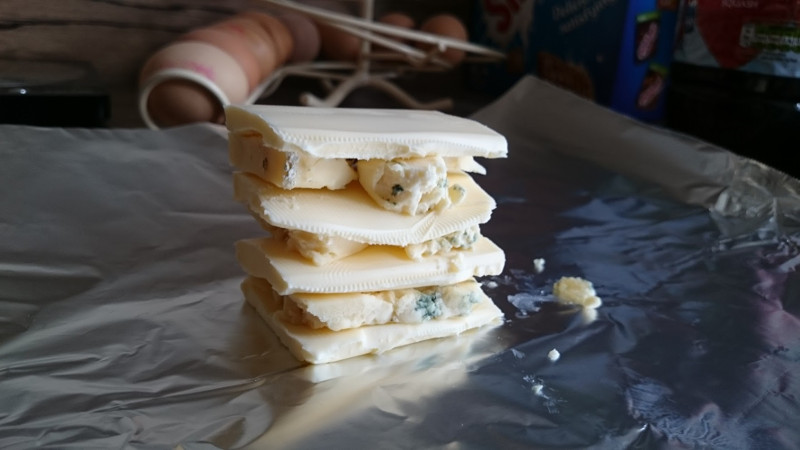 A Deeper Shade of Red

The first time I cooked a steak sous-vide, I was more than a little bit excited. The Internet had told me how much of a treat lay in store for me. My excitement was short-lived however; when I cut into the steak I was greeted not by pink - but brown. What had I done wrong?

When you cook steak it goes from red, to pink, to brown. The reason this happens is myoglobin. Myoglobin is a protein found in steak (AKA cow muscles) that 'stores' oxygen; and it's also what makes red meat, err, red. Cooking the steak triggers a reaction that causes the myoglobin to turn brown (I am not a scientist). The other thing that can make myoglobin turn brown is a lack of oxygen; and because the steak was cooked in a vacuum-sealed bag, there wasn't much oxygen available, causing the steak to turn brown.

To my delight: cutting into the steak exposed its innards to glorious, life-giving oxygen, causing it to gradually turn a beautiful shade of reddish-pink.

The Best of Both Worlds

As excited as I was when I first got my sous-vide machine, there was a part of me that worried it would be a bit of a one hit wonder; relegated to the cupboard when I wasn't serving steak. That turned out not to be the case at all. The best sausages I've ever eaten, some of the juiciest chicken I've ever had, and even the nicest cauliflower to ever pass my lips were all prepared in my good ol' sous-vide machine.

Rarely in cooking - and life - do you get the best of both worlds; if something's easier then chances are the results won't be as good. I honestly think that cooking sous-vide is an exception to that rule of thumb. Sure, you need at least a few hours' notice, and you've got to buy a potentially expensive bit of equipment to do it, but the results are fantastic and it's just so damn easy.

With sous-vide I can cook a tremendously thick, terrifyingly expensive piece of steak to perfection every time, without any worry of getting it wrong, and with hardly any effort. Yummy.